What Factors Are Influencing Job Satisfaction for Nurses?

All of which begs the question: What factors most impact job satisfaction for nurses? Here’s a closer look at the issue, including a roundup of key factors supporting nursing job satisfaction.

An early theory of job satisfaction

Several studies have looked into the issue of employee satisfaction in healthcare. One of the earliest examples? Motivation theory pioneer Frederick Herzberg’s work in the late 1950s, which asked healthcare workers to consider times when they felt best and worst about their jobs. Based on their responses, Herzberg developed the theory that there are two dimensions of job satisfaction: “hygiene” and “motivators.”

According to Herzberg, job satisfaction doesn’t directly derive from hygiene issues. So why do they matter? Because they are essential to creating work environments that are conducive to satisfaction among the employees who work there. Herzberg categorized the following workplace attributes under the heading of hygiene:

Only when these factors are in place, insists Herzberg, do motivators — which do directly facilitate satisfaction — enter the picture. These include:

Conclude authors J. Michael Syptak, MD, David W. Marsland, MD, and Deborah Ulmer, Ph.D. of Herzberg’s research in their article “Job Satisfaction: Putting Theory into Practice”, which appeared in the journal, Family Practice Management, “While there is no one right way to manage people, all of whom have different needs, backgrounds and expectations, Herzberg’s theory offers a reasonable starting point. By creating an environment that promotes job satisfaction, you are developing employees who are motivated, productive, and fulfilled. This, in turn, will contribute to higher quality patient care and patient satisfaction.”

While Herzberg’s research is useful to employers, it’s useful to healthcare workers, too. When considering your nursing employment options, considering both hygiene issues and motivators can help you find the opportunities that will best support satisfaction.

What does the survey say?

You may be asking yourself how Herzberg’s theory holds up in the real world more than half a century later? Very well, according to the results of Medscape’s recently released annual investigation into satisfaction in the nursing profession. A survey of more than 10,500 nurses from throughout the United States, the Medscape Nurse Career Satisfaction Report 2019 offers additional insights into job satisfaction for nurses today. 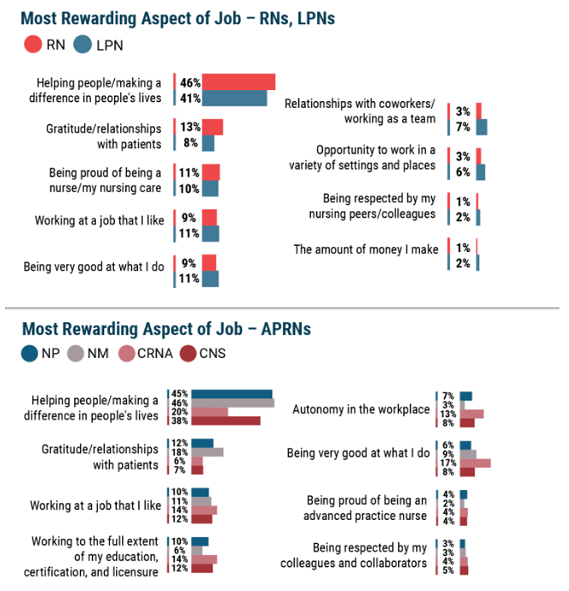 For starters, Medscape’s findings reveal that 21st-century nurses view making a difference by helping people as the most rewarding aspect of the work they do. Gratitude/relationships with patients and being proud of being a nurse claim the second and third place spots, respectively, followed by doing a job they like.

It’s hardly a surprise that patient relationships and pride in their work made the list. After all, nurses are the perennial top finisher on Gallup’s annual ranking 2020 of the most honest, ethical professions. Certainly, a commitment to withholding this sterling reputation is part of what drives their efforts while simultaneously fueling satisfaction.

The survey also highlights the rise of work-life balance as a factor in satisfaction. Clearly, flexible work hours are a big part of it. However, it’s also about more than that. “What respondents are also indirectly praising is the diversity of the nursing profession, allowing them to spend all or part of their careers still as nurses but in positions that are conducive to their lives outside of the work setting. No longer do nurses want to spend 40 years working 12-hour shifts, nights, and weekends on a busy inpatient unit,” says the Medscape report.

But what about money?

You may have noticed that one thing was conspicuously missing from the list of things nurses find satisfying about their jobs: Money. In fact, “the amount of money I am paid” landed on Medscape’s list of the least satisfying aspects of the job, alongside administration/workplace policies, excessive documentation, lack of respect from co-workers, high patient loads and lack of time to spend with patients, and the emphasis on patient satisfaction as the top priority. 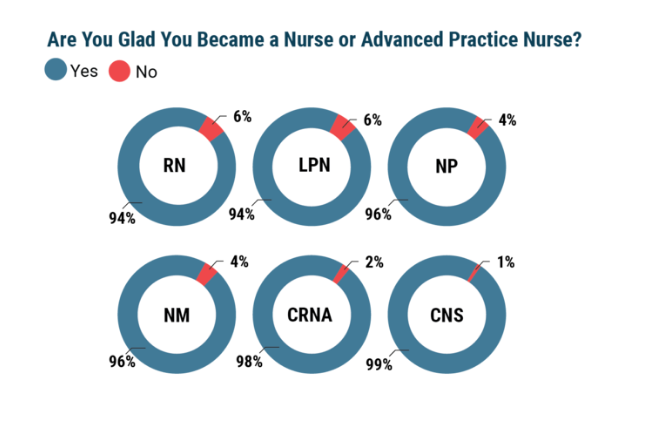 One last thing part of the Medscape report worth keeping in mind? While nursing — like all professions — has its challenges, over 90 percent of the nurses surveyed answered “yes” to the question, “Are you glad to be a nurse?” The takeaway? The satisfaction they find in the invaluable work they do far outweigh any downsides of the profession for the vast majority of nurses.

Control where and how you work now using Swipefox!